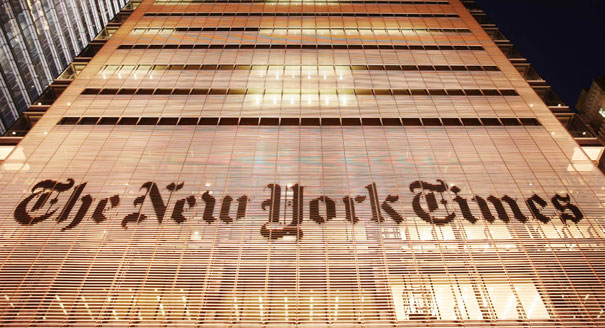 In the wake of the Mueller report that he, and many Americans believe totally exonerates him of most accusations, President Trump has demanded an apology from the New York Times.

In typical Trump fashion, the president tweeted that The Times should beg for his forgiveness for the way it covered him in relation to the Russia probe.

“I wonder if the New York Times will apologize to me a second time, as they did after the 2016 Election,” the president wrote in a series of tweets.

“But this one will have to be a far bigger & better apology. On this one they will have to get down on their knees & beg for forgiveness – they are truly the Enemy of the People!”

Trump Lashes Out at All Media

Trump spent the Easter weekend golfing in Florida but since his return to Washington, D.C. he has been on a Tweeter Tirade, tweeting and retweeting over 50 times in 24 hours, mostly about the media and their coverage of him. In a series of often scathing and uncomplimentary tweets, Trump gave a rundown of coverage, which went: “Fox and Friends” (“best of the morning political shows on television”), “Morning Joe” (helped him get elected but “too Angry, Dumb and Sick”), CNN (“a proven and long term ratings and beyond disaster”).

But, it was New York Times columnist Paul Krugman that really raised his ire, when he wrote, in the wake of the release of the Mueller Report, that “the occupant of the White House betrayed his country.” That is what prompted the president’s demand for an apology from the Times.

But rather than any kind of an apology, The New York Times public relations account responded to the tweet with a quote from publisher A.G. Sulzberger’s February statement about Trump’s attacks on the press, writing “The phrase ‘enemy of the people’ is not just false, it’s dangerous. It has an ugly history of being wielded by dictators and tyrants who sought to control public information.”

Trump, as he did in this most recent tweet, has said the newspaper has “apologized” for the way it covered him in 2016, something the paper has constantly denied doing.

In the series of Tweets against the media since the release of the Mueller Report, Trump also said, “In the “old days” if you were President and you had a good economy, you were basically immune from criticism. Remember, ‘It’s the economy stupid.’ Today I have, as President, perhaps the greatest economy in history… and to the Mainstream Media, it means NOTHING. But it will!”