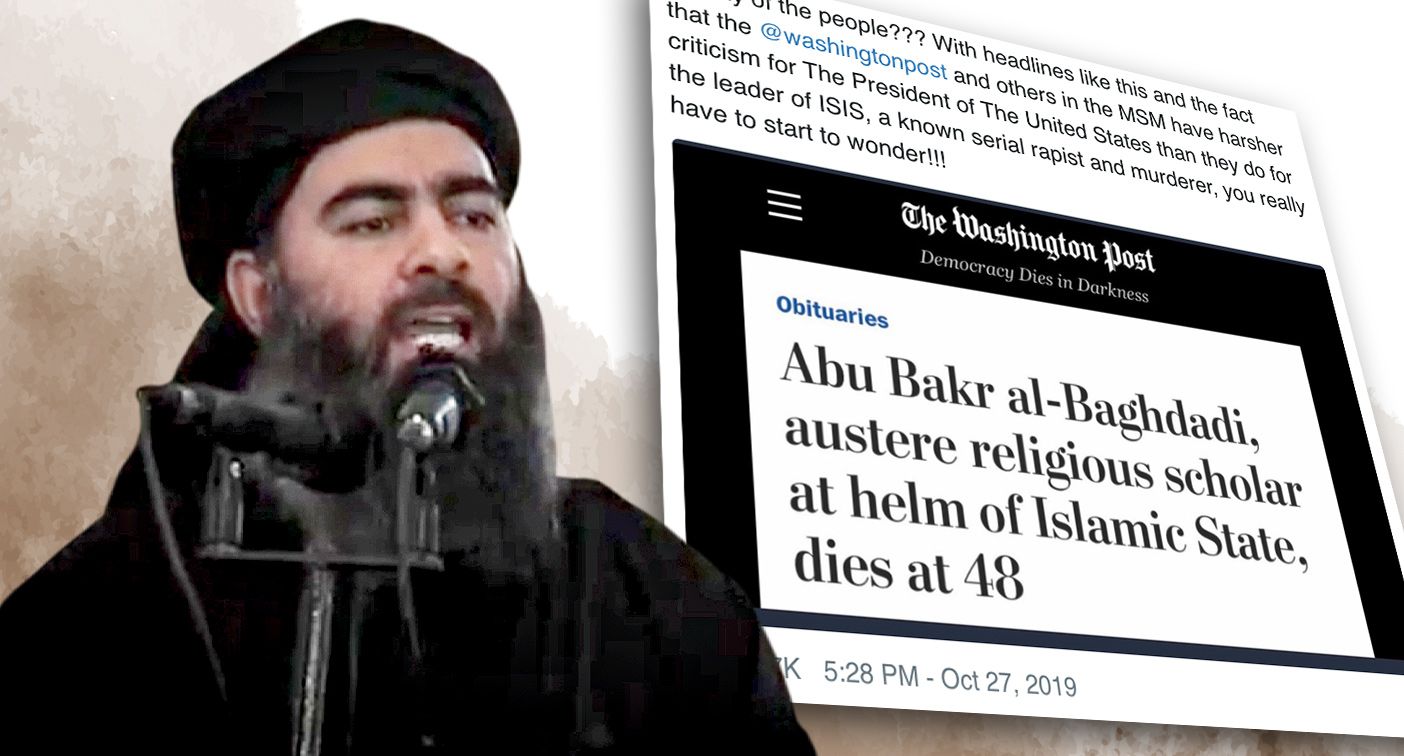 When I awoke this morning and checked my Facebook News Feed and saw posts about the absurd headline calling the now dead ISIS leader Abu Bakr al-Baghdadi an “austere religious scholar,” I thought for sure this was a Photoshop parody of the liberal leaning newspaper.

As you might imagine, backlash against the headline was swift and merciless. Dan Bongino, a Fox News contributor and former Secret Service agent said that the Washington Post treated al-Baghdadi more like “Mary Poppins” that the head of the deadly international terrorist operation. “I read the piece… the headline’s bad. The piece is even worse,” said Bongino. “They talk about a religious scholar with wire-framed glasses who was a shy, reserved guy. Like they’re talking about Mary Poppins. This was a terrorist, rapist thug.”

Secretary of State Mike Pompeo also criticized the headline Monday on “Fox & Friends,” calling it “sick” and “appalling.” Bongino went on to say, “This guy was a terrorist thug who would cut the head off an innocent man at the drop of a hat. Really, to the Washington Post — do you hate this president so much that you’re willing to throw everything away, your integrity, your morals, everything? I mean, that’s a serious question. I’m not kidding.”

We just killed one of the world’s most dangerous people,” Bongino added, “who would at a moment’s notice kill… tens of thousands of Americans, and you write about his wire-framed glasses and his beard? I mean, come on, guys. Get your heads out of your a–es, this is unbelievable.”

The Twitter-verse exploded with other “witty” ways users felt that WashPo might have headlined the obits of other notorious historical figures such as: “Nero, emperor who helped Christians bring light to Rome, dies at 30. #WaPoDeathNotices,” and “Adolf Hitler, passionate community planner and dynamic public speaker, dies at 56.#WaPoDeathNotices.”

All of this pushback must have put enough pressure on the paper to change the headline. After being on line for over 24 hours, at about 10:00 AM Monday morning, the changed the headline to read, “Abu Bakr al-Baghdadi, extremist leader of Islamic State, dies at 48.” “Post correspondents have spent years in Iraq and Syria documenting ISIS savagery, often at great personal risk,” Kristine Coratti Kelly, a spokeswoman for the Post, said in a statement. “Unfortunately, a headline written in haste to portray the origins of al-Baghdadi and ISIS didn’t communicate that brutality. The headline was promptly changed.”

Abu Bakr al-Baghdadi, the founder and leader of the Islamic State of Iraq and Syria — or ISIS – was killed on Sunday as a result of a successful raid executed by U.S. Special Forces in Syria.