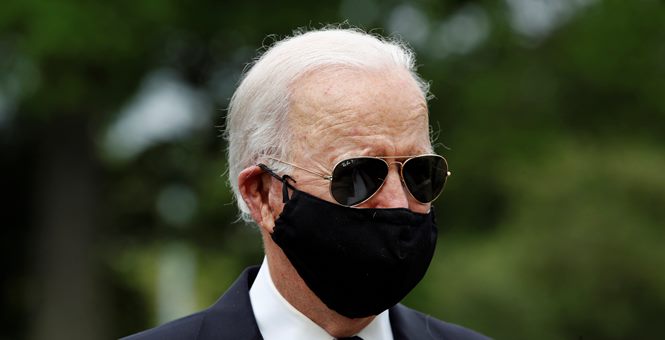 Biden Has No Good Options

This riot crisis will pass, and then it’s nothing but bad choices ahead for Badfinger Biden, not that he realizes it. He’s too far gone and far too busy watching his stories on the tee-vee to negotiate the crucial strategic decisions he faces if he wants to win. Even if not he has not already disembarked the short bus in Seniletown, he’s at least wandering aimlessly through its suburbs. The calls he has to make – about reacting to the failing Antifa/Democrat insurrection, about picking a veep, and about how to handle the only guy who seemed to grow younger, healthier and sharper in the Oval Office – would not be easy one for someone on the ball, much less someone giggling as he chases a ball around his backyard.

The uprising by the Antifa-Democrat axis, where state and local Democrat politicians wink at the violent, militarized wing of their party’s criminal antics in order to intimidate the normal, is going to be a disaster for the Dems. Oh, the media wants to present it as this dire nightmare for Trump, but within 24 hours five people personally (putting aside online folks) told me they were going to become first time gun owners. I’ll take anecdotes over media narratives any day, as President Felonia Milhous von Pantsuit should have. The Secret Trump Vote on 11/3 is gonna be huge.

There were several factors that the bad guys (uh oh, assuming genders again!) failed to appreciate when they decided to exploit the protests. First, there was the sense of betrayal it would create. People agreed that the actions of the Minneapolis cops were unacceptable, but they also saw through the cynical effort to leverage that tragedy into an excuse for radical violence. The essential insincerity of Antifa and the Antifa-curious was confirmed when we saw black law enforcement officers dead on the ground and it was received with a collective shrug by the Dem pols, trust fund terrorists and kneeling suburban mommies who wail about their privilege.

The media, aiding and abetting the “protests” (that lying label grated too) were unable to control the narrative – the attacks on innocent business owners, and the threat to formerly off-limits (liberal) areas like Beverly Hills made normals identify with the victims of the riots, and destroyed any sympathy outside of Twitter blue checks, Hollywood Schiffheads, and progressive posers. Sure, the middle- and upper-class blue voters love to virtue signal by electing hard-left Dems, but they didn’t vote for themselves being the target. Turns out that useful idiots are always first against the wall, and that makes revolutionary cosplay a lot less fun.

The Orange Man might be Bad, but having rioters in your neighborhood is worse.

Another factor was Donald Trump’s performance. To a remarkable degree, he did not make himself the story and allowed the Democrat mayors and governors who had previously played footsie with these savages to sweat. Trump could have sent in the active-duty Army under the Insurrection Act, but in doing so he would have bought his enemies’ mess. He was too smart for that. He’s going to make the Dem mayors beg him to rush in the 101st, and thereby make them – what’s that favorite word of the #Resist idiots? – “complicit.”

Biden’s big decision is how to react to the crisis. He could babble incoherently in a church – this was hours before Trump made it bad to be around churches – and he could read off a teleprompter, but it’s his strategy that’s the challenge. He has to take a stand, and threading the needle he needs to thread would be tough for someone who wasn’t a step or two away from long talks with invisible bunnies.

He can embrace law-and-order, but he gets nothing from that since Trump has captured that high ground. All Biden gets from that option is to alienate the radicals. Or he can continue with his coy embrace of these Antifa scumbags, which Trump will jam down his throats. Neither expands his base; both options shrink it in some way. Trump can only gain support from going law and order…unlike the Dems, he has no pro-chaos constituency.

And just wait until Trump starts up on the hacks on Biden’s staff who were only to happy to tell the press that they were donating money to the bail fund for rioters…until America decisively turned against the rioters. Everyone knows that if elected, his cronies will run the show, so this is a doubly potent weapon. Trump’s gonna take that bonehead maneuver and go all De Niro as Capone with a bat.

How’s a guy you can’t rely on to remember his pants to think his way out of that strategic cul-de-suck?

And then there’s the vice-presidential choice. Amy Klobuchar’s going to be tossing dishes at the help because she’s out. Besides bearing the stink of Minnesota Democrats in general, she specifically failed to charge the killer cop the last time he tried to take out an unarmed black man. And Governor Karen from Michigan is out. Between her grotesque love of bossing folks around and her husband’s “Don’t you know who I am” antics, she’s also a person of pallor and modern anti-racism demands that people be evaluated by nothing but their race. Biden can’t choose Big Chief Warren despite her status as a make-believe minority because – and this is the saddest thing ever – she would overshadow him.

So, maybe he chooses Stacy Abrams, who has offered subtle and cryptic hints that perhaps she is interested in the job. Governor Abrams (D-Diabetes) would be a great choice in my view, but I’m biased because I want Trump to win.

This leaves the politically and otherwise flexible Kamala Harris. She checks the minority box, and they can certainly patch things up over her calling him a racist on a nationally televised debate stage. When he tells her he will “forgive and forget,” she can be sure about the forgetting part. But Harris, the former prosecutor, has a record that actually allows Trump to slide to her left on criminal justice (she liked to lock up hopheads and condoned prosecutorial antics) as well as to her right (he supports the death penalty).

Who will Hoover’s dad choose? Will he remember who he chose the next day? Now, his advisors might well be expected to strongly recommend a candidate, but you know how stubborn weird old people get. I can definitely see him putting his foot unsteadily down for his choice of Stacy Abrams because she once brought him a yummy oatmeal cookie.

And then there’s going up against Trump. Have you seen him lately? He’s slimmer, and he looks like he’s glowing. Most presidents decay in office. Trump is thriving, and he’ll be going up against a guy who looks more like Jennifer Rubin every day.

On the plus side, there will be no debate, probably. Again, Gropey Joe’s vanity might be such that he insists on it, but if you were one of his handlers would you let him anywhere near a stage with Trump on it? Think Godzilla versus Tokyo, and not from one of those crappy, woke remakes.

You can’t beat Trump in a stand-up fight, and the trail of broken, mangled careers that lies twitching in his wake attest. You have to out-think him, and Biden can’t even pull off the “think” part, much less the “out.”

The last time Biden had to make a key strategic decision his choice was “#MeToo? Just kidding!” There’s no way he suddenly does better with the hard calls coming toward him. Sadly for the Dems, despite their fantasies about replacing him on the ticket, they have no choice but to rely on Biden’s skill, savvy and brains.