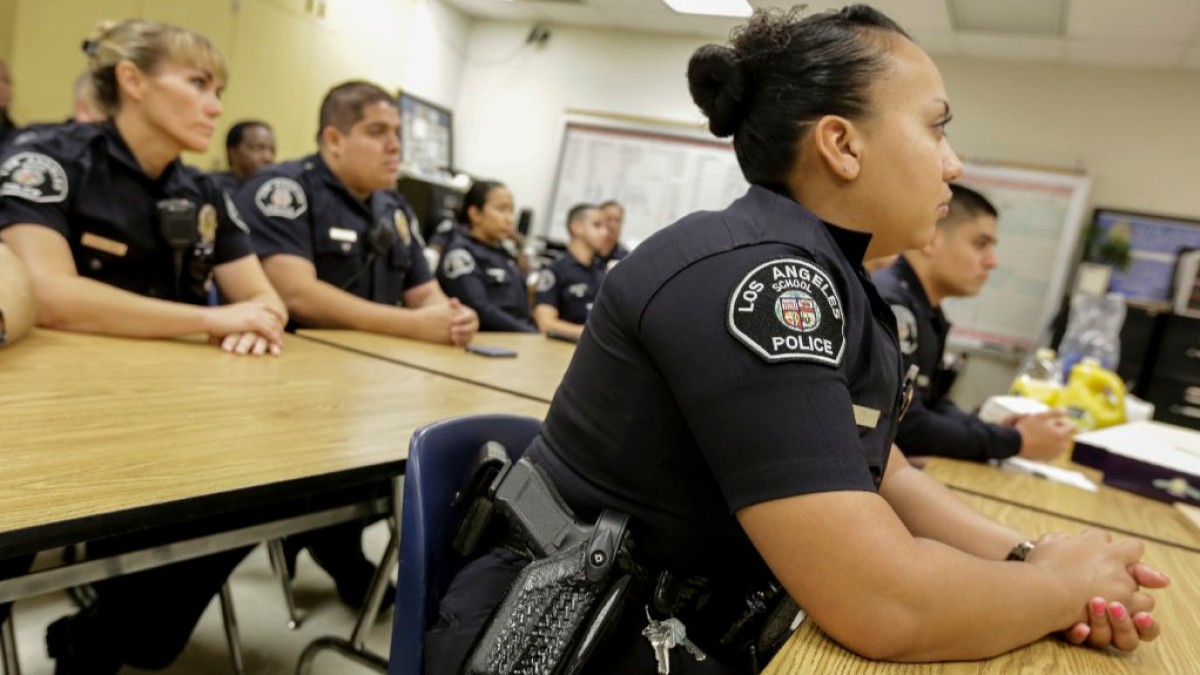 Craziness now exits on an industrial scale but among all foolish ideas, none is stupider than trying to defund police departments, particularly where poor people, disproportionately African Americans, depend on policing. Yet, just when it seems that this insanity cannot get worse, it does, and the latest madness concerns extending defunding demands to include school police. The Klan’s Imperial Wizard must be thrilled by a policy that will further undermine the education of African Americans. Do anti-cop crusaders honestly embrace the Rousseauian fantasy that children naturally soak up knowledge if only left on their own?

This defunding effort is not as preposterous as it might initially appear. Milwaukee schools have already terminated their relationships with the city’s police department while Portland. OR schools removed armed police officers from schools. Denver, Co has likewise banned police from its schools, a policy also enacted by Minneapolis and St. Paul, MN.  The LA school district cut $25 million in policing funds from its budget while in Berkeley the cut was 50%.  Declining municipal budgets may encourage yet more reductions especially if justified by “racial justice.”

To understand this crusade, consider an article in Colorlines, a radical black magazine. “Black and Brown Students Are Organizing to Remove Police From Their Schools” outlines the campaign and notes this to be an ongoing quest. To quote:

Law enforcement has had a brief yet abusive relationship with American public schools, spurring the terrorization of Black and Brown students and increased interaction with law enforcement at a young age. The rationale behind police in schools has always been for the “safety” of children. Yet, since police have shown up, the school to prison pipeline has strengthened, putting young children into the legal system and criminalizing their oftentimes normal behavior. (Italics added)

In resistance, youth and student organizers have taken to school board meetings and the streets to fight for the removal of police from schools in line with the national call to defund the police.

Statistics tell a different story about American schools — many are truly dangerous. According to one national study in 2017, about 16 percent of students in grades 9-12 reported that they had carried a weapon such as a gun, knife, or club anywhere at least one day during the previous 30 days, and 4 percent reported carrying a weapon on school property at least one day during the previous 30 days.  Another study found that during the 2017-18 school year, an estimated 962,300 violent incidents and 476,100 nonviolent incidents occurred in U.S. public schools nationwide. In New York City during the 2017-18 school year with its  1.1 million students, there were 17,991 reported violent incidents, a rate of 16.8 per thousand students, the highest rate in the state, and am admitted under-count given disincentives for accurate reporting.

Tellingly, countless statistical compilations shows that African-American youngsters are far more likely to be involved in disciplinary measures, often at three or four times beyond proportionality and despite all the talk of reforming the justice system, the proportion of blacks arrested, expelled and so on seems to be increasing. This over-representation parallels adult statistics where outcomes reflect strict legal proceedings, not the whims of school cops. Even where prohibited, when corporal punishment is administered, black are disproportionately punished.

Rampant school violence is also reflected resource allocation since, after all, why spend money for a nonexistent problem? In New York City’s overwhelmingly minority public schools, for example, the Division of School Safety employs approximately 5000 school-safety agents and 200 police officers. Moreover, there are tough requirements to become a school-safety officer — drug screening, a character and background check and medical standards, among others. Hardly surprising given levels of school mayhem, this workforce exceeds the total number of police officers in Houston, Texas.  These agents resemble regular police in their uniforms, possess legal authority of make warrantless arrests, carry handcuffs and can use physical and deadly force.

It is thus preposterous to insist that despite all the evidence of criminality and the resources committed to combat the lawlessness, school police, as per Colorlines’ essay, exists only to criminalize “innocent” young blacks and push them into the school-to-prison pipeline. Moreover, it lacks credibility to suggest that a bunch of screaming schoolkids can force Los Angeles or Minneapolis to cut school police budgets. There is more to this defunding campaign than a bunch of unruly youngsters.

These activists are “useful idiots” who advance an agenda benefiting others, not themselves. Money undoubtedly plays a role given that American K-12 education financially rewards failure, especially when the failure involves predominantly black and Hispanic schools. Fewer police mean more out-of-control classrooms, which, in turn, brings lower test scores and dreadful test scores brings yet more “investing in America’s future.” American education hardly embraces the business model of refusing to fund failure; it’s just the opposite.

Since K-12 education is highly labor intensive, increased funding begets newly hired armies of assistant principals, curriculum coordinators, social workers, therapists and classroom assistants along with “experts” in conflict resolution, school-based community outreach, and mental health specialists in anger management. Alas, lacking the necessary coercive power, these bureaucrats are powerless to impose order. How might social workers react if students bring guns to school? Counsel the miscreants? Meanwhile, teacher unions will also welcome depolicing since it brings yet more dues-paying members and while inadequate security may put teachers at risk, surely — it will be alleged — a larger staff can handle that problem,

More violent schools will exacerbate yet more racial segregation in American education as white and Asian parents refuse to put junior at risk. Physical safety is non-negotiable, and unless these parents can afford expensive private schools or safe charter academies, the massive tax-destroying white flight of the 1950s and 60s will return. Middle-class blacks and Hispanics will also join the exodus rather than deal with schools overrun with bullies, drug dealers, and gangbangers.

Increased race-related school violence will, however, be a new-found economic windfall for many blacks, whether minimum-wage teacher aides or highly paid school superintendents. For one, few whites (especially young women) will risk working in unsafe conditions and, two, it will be widely assumed that blacks themselves can best navigate this violence (“cultural competence”). Racial segregation will also reduce litigation — can’t sue a school district for racial discrimination if entirely run by African Americans.

Finally, abolishing school police guarantees expanding the school-to-prison pipeline all the while encouraging yet more black-on-black violence. Absent policing, minor school disputes will escalate, guns will replace fists, and those who might have learned restraint early on will go unpunished until they encounter real police, not the more tolerant school version. Prison will replace suspension and with nobody able to impose peace, gang membership or packing heat are the only prudent alternatives. Meanwhile, those who really do desire an education will be lucky to just survive in this Hobbesian world. Score yet one more victory for stupidity under the guise of bringing justice.