How This Man Survived an Attack by a Starving Lion 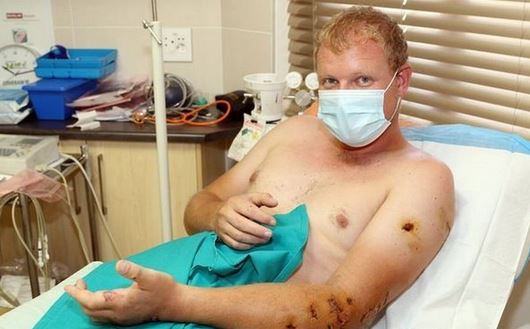 A camper miraculously survived an attack by a starving lion that jumped into his tent and tried to eat him alive.

32-year-old outdoor expert Gotz Neef was working at the Okavango Delta retreat in Botswana, Southern Africa. He was asleep in his tent when he heard a noise outside.

Neef says he saw the outline of a nose pushing in through the tent. He then punched it as hard as he could, not realizing he had just angered a starving lion.

For the next five minutes, Neef fought the predator with everything he had in him.

Fellow researcher Dr. Rainer Von Brandis, who was also on the campground, heard the commotion from his tent and ran half-naked to scare the lion away with just a branch.

Dr. Von Brandis, 46, said, “I guess I was not a pretty sight in just a t-shirt naked from the waist down and wearing a head torch screaming at this lion who was attacking my friend.”

Dr. Von Brandis is a married father-of-two from Cape Town. He is the research director of the Wild Bird Trust and was on an expedition with Gotz and six other researchers in the wilds of Botswana.

He said, “I heard Gotz screaming there was something big outside his tent and I ran out in the pitch black with my head torch on and saw this big male lion had collapsed his tent. It had one paw on Gotz and fortunately was chewing on the tent poles rather than him and I just saw some big piles of dried elephant dung and pelted the lion with it really hard. That didn’t work so I threw thorn branches at it but that didn’t work either and by now the lion had Gotz by the elbow and was seriously chewing him and my friend was screaming. I was nearly naked and was screaming as well and ran up to the lion and beat it with a big piece of a tree but it did nothing and then our head ranger Tomalets Setlabosha came out. I was smashing the lion with the branch but it would not stop chewing on Gotz and hardly even blinked when Tomalets threw a thunder flash banger used to scare hippos close to it. Then Tomalets jumped into the Land Cruiser and ran the lion over but it would not leave Gotz alone and he had to run it over three times before it let go and ran off into the bush.”

The group patched up Gotz and took him to a hospital in Maun 50 miles away. The trip took 3 hours.

He was then airlifted back to Windhoek in Namibia where he lives and taken to the hospital there where he is recovering from multiple bite injuries.

Dr Von Brandis added, “I cannot even guess how many fang holes he has. It is important to say that there is nothing reckless in camping in tents out in the wild as that is the only way you can do your research in the wild as there is no other way of doing this. What happened was extremely rare where an old lion is driven out of its pride and was starving to death and to get a meal this was its last roll of the dice and he was so desperate. Gotz will heal in time and will be back on the team soon and the lion was put out of its misery. This was not normal lion behavior but it had no other option to try and stay alive.”

Gotz had 16 deep bite marks stitched up in his arms, shoulders, and head. He also suffered claw marks from the lion.