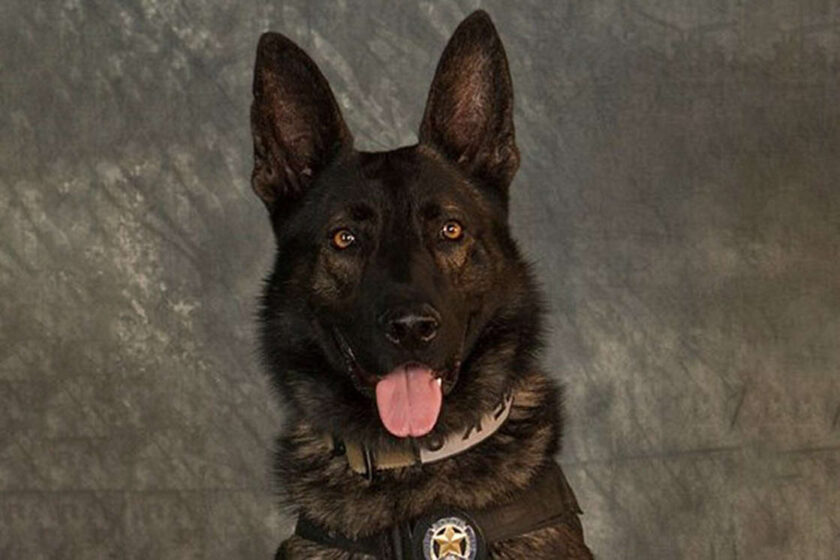 A 16-year-old robbery suspect has been arrested after allegedly beating a police dog to death during a foot chase in Texas.

On Monday around 2:39 a.m. local time, officers from the Mesquite Police Department were dispatched to assist the Balch Springs Police Department in pursuing multiple robbery suspects in a car, according to a news release from Mesquite police.

During a chase, police were able to disable the suspects’ vehicle at Bruton Road and Interstate 635 with the use of spike strips.

The suspects then fled on foot into a wooded area by the highway, prompting officers to call in Mesquite police’s K-9 unit, Kozmo, to help with tracking, according to the release.

Though the suspects were eventually apprehended, Kozmo did not return and was found dead around 4:13 a.m. following an extensive search of the area, according to authorities.

A necropsy later determined that Kozmo had suffered “trauma consistent with an assault,” providing probable cause to charge one of the robbery suspects — a 16-year-old juvenile male — with interference with a police service animal (causing injury or death), police said.

Want to keep up with the latest crime coverage? Sign up for PEOPLE’s free True Crime newsletter for breaking crime news, ongoing trial coverage and details of intriguing unsolved cases.

The Fort Worth Star-Telegram reported that the other robbery suspects were an adult and another juvenile.

The identities of the suspects have not been released by authorities.

“It should be noted that our K9s are members of the MPD family, Kozmo was an amazing and loyal dog who gave his life in the performance of his duties,” the Mesquite Police Department said in a statement on Monday. “We ask everyone to keep all of our officers in their thoughts and prayers as we deal with this loss.”

According to local news outlet KXXV, Kozmo had been with the department since 2017.

12 thoughts on “Teen Arrested For Beating Police Dog to Death”