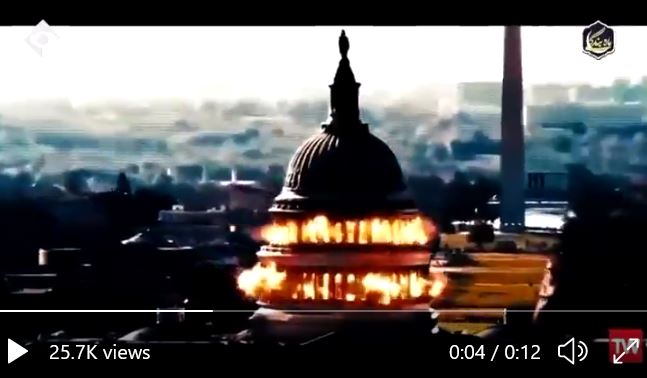 Iran Threatens Attack on US Capitol Building in New Video

Iran has released a new video showing its military forces pretending to blow up the United States Capitol building. The threat comes as the Biden administration moves closer to giving Tehran billions of dollars in economic sanctions relief.

The video was released on Sunday on Iranian state-controlled television before Iranian supreme leader Ali Khamenei delivered a speech. During his speech, Khamenei praised the country’s Islamic Revolutionary Guards Corps, the military force that has killed Americans. He also celebrated IRGC leader Qassem Soleimani, who was killed in a drone strike under the Trump administration.

The video, as well as Khamenei’s speech, come amid President Biden’s efforts to negotiate a new nuclear deal with Iran. The Biden administration is reportedly prepared to lift strict sanctions on Iran’s banks, diplomats, and oil trade, signaling that Washington is desperate to entice Iran into accepting a deal that would only slightly unwind its growing nuclear program.

Republicans in Congress are accusing the Biden administration of relieving pressure on Iran at a time when it could topple the hardline regime and empower democratic reformers in the country. Republicans also see the IRGC video as a sign that Iran’s regime will never moderate its anti-American and anti-Western ideals.

“Last week, Iran’s chief diplomat allegedly admitted the IRGC calls the shots in Tehran. Now, Iran releases a fake video of the IRGC blowing up our Capitol,” Sen. Pat Toomey (R., Pa.) tweeted in response to the video. “The Biden [administration’s] priority should be ensuring Iran cannot carry out such an attack, not capitulating by removing sanctions.”

Toomey’s comments are bolstered by a recently leaked video of Iranian foreign minister Javad Zarif admitting in a private conversation that his government will never find common ground with America or abandon its radical views.

“I believe Iran and the U.S. will never be friends as long as the Islamic Republic preserves its identity,” Zarif said on the tape. “Never will our issues with America be resolved.”

Khamenei, in his weekend address to the country, bolstered Zarif’s remarks by praising the IRGC’s ongoing operations in the region, which have targeted U.S. and Western forces. Khamenei vowed to continue fueling wars across the Middle East.

“The Americans have been for years deeply saddened by the Islamic Republic’s influence [in the region], and they were angry with General Soleimani for this reason and martyred him for this reason,” he said.

Iranian officials also dismissed reports over the weekend of an imminent prisoner swap with the United States. Regional news outlets claimed the United States agreed to pay Iran $7 billion in exchange for the release of several American hostages. Both countries denied the report on Sunday.

“This news is not confirmed,” Majid Takht-Ravanchi, Iran’s ambassador to the United Nations, said on Monday.

“Reports that a prisoner swap deal has been reached are not true,” said State Department spokesman Ned Price, who would not comment on whether the United States is prepared to pay cash as part of any future deal.