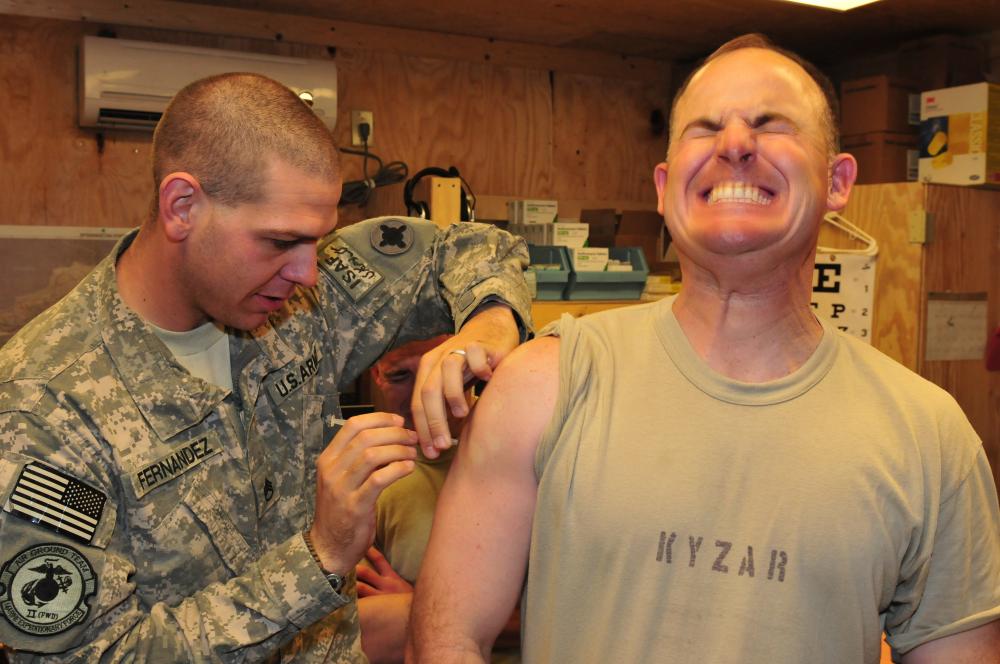 A high-ranking US Army officer has resigned and given up his pension after almost 20 years of service because of what he called President Biden’s “unethical, immoral and tyrannical” vaccine mandate.

Lt. Col. Paul Douglas Hague said in a resignation letter tweeted by his wife, Katie Phipps Hague, that he was resigning from his 19-year career primarily because of the Pentagon requirement that all US military members be jabbed by mid-September.

Katie Hague said in the tweet that her hubby was “walking away from all he’s worked for and believed in since he was an ROTC kid at UGA.”

Hague, who is stationed at Fort Bragg in North Carolina, reportedly wrote in his letter: “First, and foremost, I am incapable of subjecting myself to the unlawful, unethical, immoral and tyrannical order to sit still and allow a serum to be injected into my flesh against my will and better judgment.”

He added that “it is impossible for this so-called ‘vaccine’ to have been studied adequately to determine the long-term effects. It simply has not existed for enough time and any claim otherwise is blatantly ignorant and likely an outright lie driven by negligent political agenda.”

The Centers for Disease Control and Prevention has said the shots are safe and effective.

In the letter, which his wife also shared with Fox News, Hague continued: “I cannot and will not contribute to the fall of this great nation and its people – those very Americans whom I swore to protect the liberty of at all cost.

“The values that our nation was founded on, has lived by and thrived under, have been utterly decimated by the current presidential administration and the leadership of the military,” he added.

Hague also cited “a complete lack of confidence” in the Biden administration and the civilian leadership of the military over the “traitorous withdrawal from Afghanistan,” as well as what he viewed as “an ideologically Marxist takeover of the military and United States government at their upper echelons.”

“The strategic decisions with regard to Afghanistan made by these people have not only unnecessarily cost the lives of 13 service members and many Afghanis, but have undoubtedly set our nation up for many more attacks both in Afghanistan and within our own borders,” he wrote.

The officer expressed concerns that adequate screenings had not been conducted during the “chaos and haste” of the evacuation in Kabul – “potentially leading to transporting threatening terrorists to friendly nations, including the United States.”

He added: “I would like nothing more than to continue in the Army to reach my 20 years of active federal service and retire with my pension.

“However, I instead will join those who have served before me in pledging my Life, my Fortune, and my Sacred Honor to continue resisting the eternal and ever-mutable forms of oppression and tyranny – both from enemies outside our nation‘s borders, and those within,” Hague wrote.

His wife told Fox News that the letter, which he submitted on Aug. 30, has been “sent up his chain of command” and appeared to be “going smoothly” so far.

Katie also sought to clarify some discrepancies in the missive that critics sought to use to debunk his resignation.

The letter is originally dated Aug. 23 while the terrorist bombing in Kabul occurred three days later, but Phipps Hague told the network that her husband simply forgot to change the date after making several revisions.

She also responded to skeptics who wondered why her husband didn’t take issue with all the other vaccinations he was required to take to serve his country.

“He didn’t resign over a vaccine. He said he felt the vaccine was being used as a political tool to divide and segregate Americans,” Phipps Hague said. “He then went on to list many other reasons for his resignation – none of which have anything to do with vaccines.”

Her husband told Fox News that he stood by what he wrote.

Army spokesman Lt. Col. Gabriel J. Ramirez told the network that “the US Army does not comment on administrative actions.”

In 2003, he deployed to Iraq for 13 months and again for 15 months in 2006, the outlet reported. Among his awards and decorations are the Army Commendation and Army Achievement Medals, Afghanistan Campaign Medal with three campaign stars and the Ranger Tab.

Hague is not the only military member to leave after chastising his bosses.

Marine Lt. Col. Stuart Scheller was relieved of his command last month after publicly calling out senior leaders and walked away from a $2 million pension after 17 years of service.

Scheller posted a video that went viral on Facebook in which he ripped into military leadership following the devastating suicide bombing at Kabul airport.