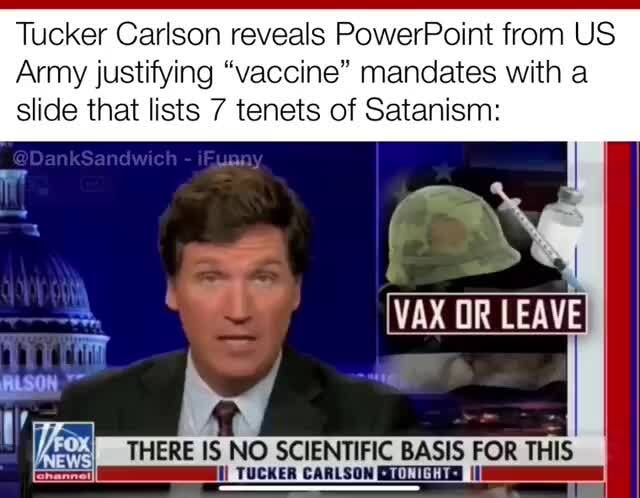 During his show Monday night, Carlson claimed the point of mandatory vaccinations is to “identify the sincere Christians in the ranks, the freethinkers, the men with high testosterone levels, and anyone else who doesn’t love Joe Biden, and make them leave immediately. It’s a takeover of the U.S. military.”

He brought up a PowerPoint slide from the U.S. Army obtained by the network.

“This is an actual slide from it on your screen. You will notice there, the sympathetic portrayal of Satanism. ‘How many children were sacrificed to Satan because of the vaccine?’ the slide reads, apparently sarcastically,” Carlson explained.

He added, “Then the presentation proceeds to list the so called tenets of Satanism which are taken from the Temple of Satanism website. So here you have the United States Army doing P.R. for Satanism.”

Carlson argued the rest of the presentation is “less shocking” but “dishonest.” He argued it falsely claims only three individuals have died from the vaccine, adding, “Reports collected by the Biden administration itself indicate that number is actually in the thousands.”

In August, Defense Secretary Lloyd Austin issued a memo requiring all U.S. service members to get the COVID-19 vaccine.Is the mandate an effort to target certain groups of people?Yes No
Completing this poll entitles you to our news updates free of charge. You may opt out at anytime. You also agree to our Privacy Policy and Terms of Use.

“Mandatory vaccinations are familiar to all of our Service members, and mission-critical inoculation is almost as old as the U.S. military itself,” Austin said.

He added, “Our administration of safe, effective COVID-19 vaccines has produced admirable results to date, and I know the Department of Defense will come together to finish the job, with urgency, professionalism, and compassion.”

According to ABC News, service members are already required to get up to 17 different vaccines. It is dependent on where they are deployed and includes shots for smallpox, hepatitis, polio and the flu.

Pentagon spokesman John Kirby said commanders should enforce the vaccine mandate with “skill and a measure of compassion.” If a service member objects, they will have the option of meeting with medical personnel and leadership, as ABC News reports.